Where Did My Holiday Go?

Where did my holiday go? It has gone much too quickly. We spent the first weekend around the house. My parents came to visit and Ali returned from Uni. My dad helped Tony change the handrail on the stairs. It was a low profile rail which was useless if you lost your footing as you couldn't get a grip to stop yourself from falling. The new rail is wonderful by comparison, it is properly mounted on brackets and sealed with varnish. Thanks Dad for your help.
During the rest of the week we went to the pictures/cinema to see; Angels and Demons with Tom Hanks as Professor Robert Langdon - It was a brilliant interpretation of the Dan Brown novel of the same name and we all enjoyed it very much, even me who is inclined to close my eyes if it gets scary! We also saw Night At The Museum 2 Battle Of The Smithsonian. We enjoyed it so much we keep quoting bits from the film, then we bought the original Night at the Museum on DVD which was also very good. We also visited Clandon Park N.T. which was brilliant. Clandon has a hidden Dutch sunken garden, the village church, the house itself and a Maori house - Hinemihi o te Ao Tawhito, which is the only one of its kind in England. I remember standing inside the Maori house when I was a child so it was like seeing an old friend. Best of all for Em the restaurant actually had food she could eat and even offered Gluten free/Dairy free cakes, which made all the difference to our day out.
On Friday we went to Brighton to see the Royal Pavilion which is the former holiday home of The Prince Regent, later King George IV. Opulent, swathed in gold and dripping with Chinese dragons and serpents it is an amazing show piece home. To stand in the main dinning salon and imagine yourself at one of the lavish dinner parties is quite easy. The gardens are beautiful and have been restored with many of the same type of plants from the period when the Pavilion was newly built in the 19th century. I was surprised how many plants I recognised that are still available today.
On Sunday we visited Uppark House N.T which suffered a major fire in 1989. With the insurance money and funding from English Heritage the downstairs rooms were restored to the same condition they were "the day before the fire." As a result it looks an odd mismatch of rescued and conserved pieces along with some new replacement and gives the place a shabby, tired look. There are virtually no gardens either as it was landscaped by Henry Repton to fit in with the dramatic views of the South Downs. 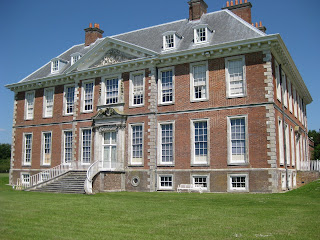 Back to work has been busy and with the glorious weather at the moment it has been difficult to be indoors. I hope you have a happy week. Jane x
Posted by Jane at 16:48

You've had a grand time!

Wow I never knew there was a Maori Marae in the UK. I had to do a double take when I saw your picture. I thought you'd nipped over here for a moment.