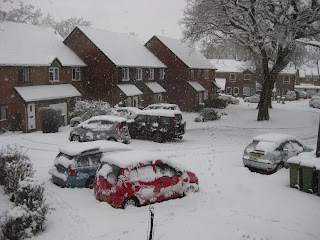 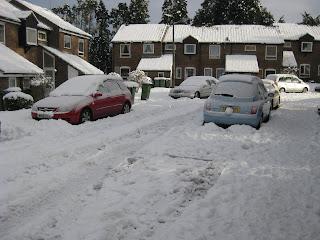 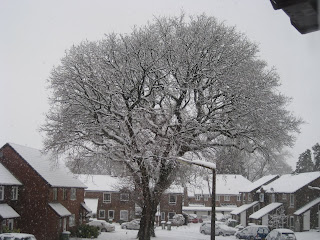 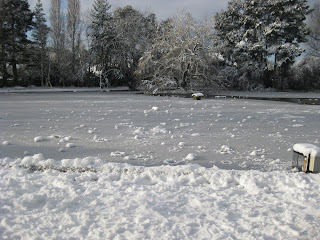 The snow arrived Tuesday night / Wednesday morning as it did right across the lower half of the British Isles, so we woke up to 8-10 inches of the white stuff. School was shut and has remained so for the rest of the week due to the inability to run buses and get along the local roads. We are, it seems, one of those rural communities which is almost cut off. We've no post, the buses aren't running throught the village, the bin collections haven't happened and of course we haven't, and won't see, a snow plough or gritter because we are not an A road or Motorway. Until yesterday morning no deliveries of milk or bread had made it into the village either. But in true british style we've been helping each other out, checking on the elderly neighbours then slithering off to the shop to find out what supplies there are available. We haven't been able to get out of our driveway or road as you can see from the photos. The only people who have suceeded are two neighbours with 4x4's. Meanwhile school have kept Em busy with so much work on the VLE that she hasn't had chance to build a snowman or play in the snow! Then yesterday afternoon, she had to build a sculpture in the snow for art, she had to research Andrew Goldsworthy and then sculpt something using his work as inspiration. She decided to mimic 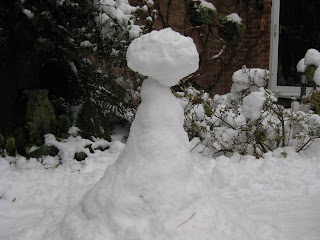 his stone balancing in snow, now she has to photograph it as it melts! Thats not happening much at the moment, although there are some spectacular icicles appearing on our guttering 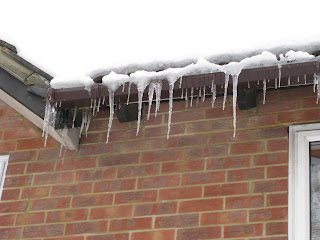 . We have enjoyed our time at home altogether, but the novelty has worn off now. Tony says "It is so frustating that we are stuck at home unable to get to work or anywhere else". The enforced time at home has meant that I have been supporting Em with her school work and trying to get a little crafting fitted in around it all. So far I have managed to finish my socks - Yipee! 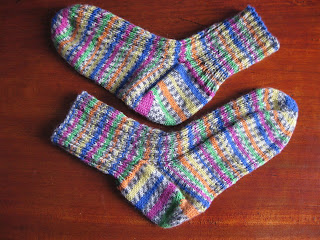 I hope we might get out to the village centre this morning on foot. See you all soon. Jane x
Posted by Jane at 09:16

Little House By The Sea said...

I must admit that I am kind of enjoying the snow at the moment. We have had it since well before christmas and it shows little chance of going just yet. I think that we will have to dig the car out. Our road is always kept pretty clear due to having emergency services at the end of the road and but the side roads are terrible. I have been off work since Wednesday as my school closed and the children had Friday off. Looking at the snow coming down now I will be surprised to see them open on Monday.
Take care,

I love those socks, Jane! They're so bright and cheery and I'm sure they'll keep your feet warm during all this snow.

Is there any sign of the snow letting up and melting?

About the boa sweater: I would be happy to photocopy the pattern and send it to you since it is actually in a book that I am keeping. Let me know if you want it.

I LOVE hyour pics of the snow. We've had a bit, but I've been in other areas when the big snows hit. (I was in Chicago during the Washington blizzard, and in Washington during the Chicago blizzard.)

I love the colorful socks!

Hi Jane, I love the socks - but then, you know I love knitted socks :) I can't believe all the snow you guys are having. I know that is unusual for all of you. Here we kind of chuckle about it. But then you don't have the snow plows and 4 wheel drives that make up our day-to-day lives :) Keep warm and make a snow angel.

Clyde wants to know if you make socks for camels.

We just have cold and rain here, no snow...now that Clyde has been boasting about his socks, Queen Bitty is demanding a pair....There are apparently many chilly toes in the Pond!

And a tutu. She needs a tutu with her pretty pink socks.

ohh I could do with those socks my feet are freezing, I have enjoyed visiting your blog and will pop in again. Would you call and say hello ?
Karen

Many Thanks for your visit :o) so Lovely to see You again. I am glad you enjoyed the flowers, isn't it great that we are thawing out again? although I've heard only for a short while.
Mind You the children around here would like the snow to stay forEVER! Lily quite Loves it too.