For the last two weeks I have been making Alan Dart's Wilhemina Witch as featured in Simply Knitting magazine for Al who's away at University (I also made a little cat from Jean Greenhowe's patterns and he's called Penfold).
Because of my cold/virus bug I couldn't go to see her as we had planned this weekend so Tony went instead. This is the photo he took, as I had forgotten to take a picture before Wilhemina and Penfold went to their new home. 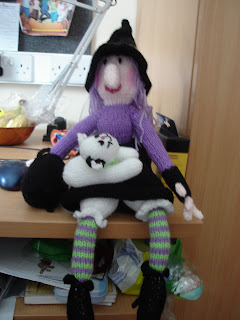 Whilst he was out visiting Al, I stayed home with Em and made a sock monkey whom Em named Rosie. Em had great fun looking through my Gran's button box for the eyes. She also found a pretty buckle, so we put it onto a piece of ribbon around Rosie's waist. Then I found some real Mother of Pearl buttons and we made them into a bracelet. 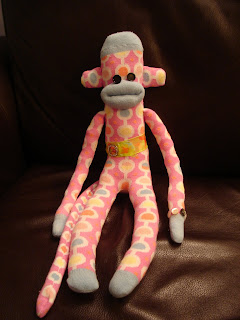 My bug is now finally going and I'm begining to feel much better although I am worn out by lunchtime! I'm now going through the squeaking & coughing phase.
Posted by Jane at 17:04

I keep buying pairs of socks to make more monkeys, but don't seem to get round to it. Mind you, after the Dennis the scary sock monkey fiasco, I may not bother .....

Rosie isn't scary at all though - quite the opposite, and your witch is wicked too!