Photo's From The Christmas Holidays 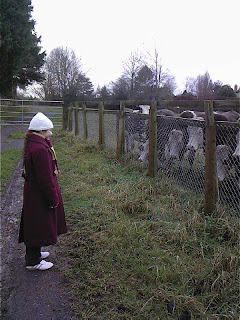 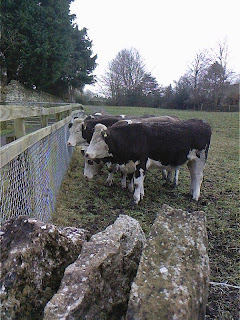 This photo was taken on Christmas Day afternoon in Mum & Dad's village. The calves looked at Em and she looked at them, but Al took a couple of steps onto the grass and they all backed off ready to turn tail and run. Not Al's fault I hasten to add.

Em was given a cat jigsaw puzzle which she needed a bit of help with, but we managed to finish it in the afternoon after our walk. It came in the pretty little tin and she loved it.

On the Thursday we went to Stourhead National Trust House and Garden - only the Garden was open. Em was very proudly wearing her High School Musical Bag with Zac Efron's photo on it which Al gave her for Christmas.

It was cold, but we had lunch in the restaurant of soup and roll with sandwiches. Suitably refreshed we then went for a walk around the gardens.

Later in the week we went for a day out to Bath, where I took a photo of Sally Lunn's tea shop. Then it rained heavily which stopped me taking any more photos. 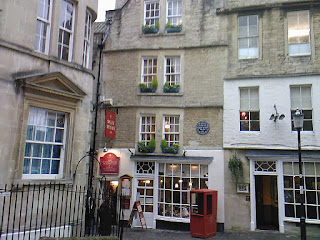 Last day in Dorset, the girls played Monopoly and Robert bear agreed to be the third player and he won! Hahaha clever bear.
Posted by Jane at 16:34

Your pics are awesome. I am so jealous of the beautiful places you went to. It really sounds like your holiday was perfect!!

Little House By The Sea said...

It sounds like you have had a wonderful holiday. I love the pictures.

Lovely photos! When my kids were younger I had to BAN monopoly playing in our house because of the fights it caused...even if their Dad played (kids now say he was the worst cheat!!!) It is still gathering dust on the top shelf. Maybe if we'd had a Robert Bear....?

Hi Jane - just read your comment on our Loo-sley blog and thought I would explain the "real live comments" bit! My sister keeps telling me that the people I meet through blogland aren't really real (i.e. I haven't met them in person) which is why Lesley and I (who talk to each other far more frequently than I do to anyone else I know) call each other "my imaginary friend" - this joke has just stuck I guess and it is Ally (my sister)'s job to tease us about it!!! Lucy x