Today as the weather started so warm and sunny I decided to do some gardening whilst Tony hoovered and washed his car. 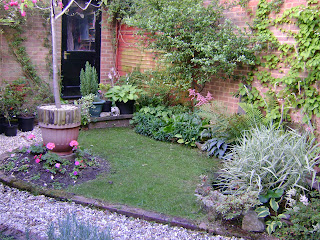 Em hopped in and out between us chattering all the while, I cut back the climbing Hydrangea as it was headed for the roof! Trimming it to 8ft tall. Today was a good time to prune as it has just finished flowering so it now has the chance to set some flowerbuds for next year. My next victim was the climbing rose that is just showing in the upper left corner of the photo, It was planted by my father-in-law Peter when he and MiL moved here in 1985. It was a cutting from a plant in the garden of their previous house, I think it may be called Excelsior. There was a lot of old wood which needed removing and some new shoots needed tying in. This afternoon with Tony's assistance I attacked the Pyracantha as it had become too large and unruly. After a bumper year of berries last winter it hadn't flowered at all this year so I'm hoping the prune will also help it to think about flowering next year.
Last weekend whilst visiting my parents my mother gave me a doll of mine which she had found, her name is Matilda and the jacket and bonnet she is wearing was my very first knitted garment. I learnt to knit in primary school, we started on a scarf each and gradually learnt different stitches along its length made in grey wool. When I finished my teacher decided I should knit a jacket for my doll, this was a big jump as I had to learn to do moss stitch and understand garment shaping. I had a lot of assistance from my Gran but I managed it and I knitted a bonnet too, it still looks ok and it's approximately 34 years old. 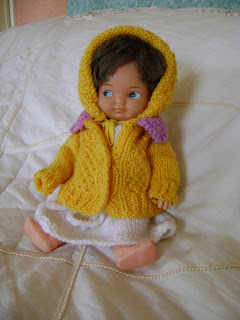 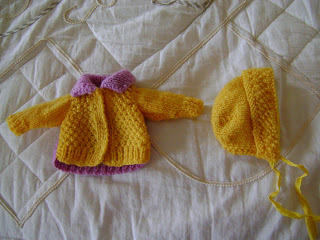 How lovely to have found your old doll again - her jacket and bonnet are lovely and all the more amazing for being 34 years old!!

Your garden is looking beautiful. It's such a relief to get some reasonable weather again!

Your garden is amazing...it has that old fashioned quality to it that I love. My garden got hailed on so badly this past weekend that there is nothing left of my hostas - absolutely shredded to bits.

That sweater and hat set is absolutely, totally, completely precious! What a treasure for you!

Wow,it must be wonderful to find something you had when you wee a child. The clothes look so sweet, how clever were you. The garden looks lovely too.

What a beautiful garden. Mine is in a terrible state following building work. Isn't it lovely when you find things from the past. Love your dolly's jacket and bonnet!