We've had a lovely break, We stayed in a cottage on the National Trust Estate of Coleton Fishacre - Kingswear, Devon. It was lovely as there was a bottle of milk, tea bags/coffee and biscuits for you to have a drink on arrival, it was so quiet too. Greenway was close by in Dartmouth which was the holiday home of Agatha Christie, it is now owned by the National Trust. You have to pre-book parking if going by car but it was a fascinating house to visit. We crossed the river Dart by the historic ferry and wandered the streets of Dartmouth. We lunched in the station restaurant and on our walk along the sea front stopped to watch the children crab fishing. Babbacombe model village was a very interesting place to visit, they have even created the 2012 London Olympics construction site amongst all the other dioramas. On our final day we visited Brixham and stopped for lunch at Tiffany's. Al is an Audrey Hepburn fan so was delighted to have "Breakfast at Tiffanys"

My Holiday Stitching
I have stitched a gift for a friend who is leaving work to study to become a Vicar in the Church of England. 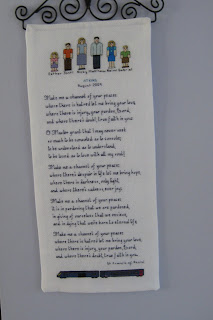 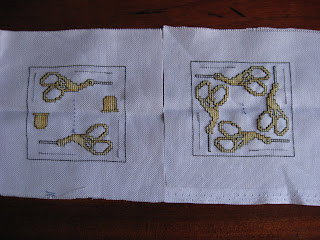 I chose the prayer by Saint Francis of Assisi - Make Me A Channel Of Your Peace as the verse with other motifs of family and trains. I also stitched the two sides of a stork scissor Biscornu from a pattern by xstitch happy I haven't found time yet to sew it together. 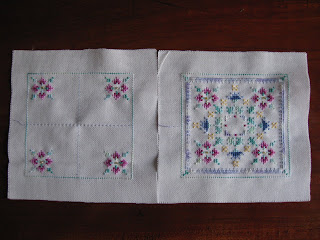 Then I moved on to a biscornu pattern I had saved from The world of Cross Stitching Magazine, that is also awaiting stitching up. Finally I designed a biscornu as a gift for one of Em's Guiders as she got married in July and Em together with five other guides formed a Guard of Honour with arches of ivy as the Bride and Groom came out of church. I used Jo Verso's hearts for the centre but the rest of the designs were mine. (I have blanked out the surnames to protect their privacy) The reverse will have the girls names and the ivy clad arches that they held. Finally I have started to stitch Mary Wigham Quaker Sampler from Ackworth School, Yorkshire. The pattern and SAL can be found on the Needleprint Blog. 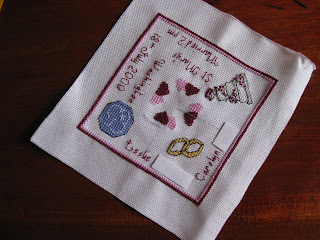 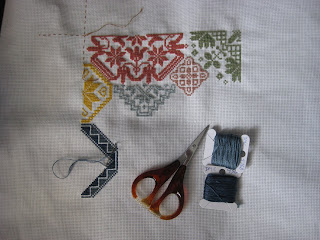 You do beautiful work!

You have had such great adventures and done plenty of stitching. I have cast on for the boyfriend sweater!